Q. The Witch's Guide to Cooking with Children is inspired by Hansel and Gretel. What does that mean, "inspired"?

A. One day, I wondered to myself: Who’s the most terrible villain of them all for a children's story? And it occurred to me that it was probably the witch who eats children from Hansel and Gretel. Yes, I thought, she’s a terrific villain. She's going to cook and eat you. So I asked myself: What would it be like to go up against her in modern times? Then I decided that the kids to face her should be a brother and sister, like Hansel and Gretel. But they should be two modern kids: Solomon and Constance. And they should argue a lot and not always get along, like normal siblings. But faced with being eaten, they stick together of course.

Q. Does The Witch’s Guide to Cooking with Children retell Hansel and Gretel scene by scene?

A. I didn't think it was interesting to stick too closely to Hansel and Gretel. I wanted to write a new story about two modern kids who meet the child-eating witch. So I didn't keep any of the scenes. Instead I asked myself: Where would she live now? How does she get kids to eat?

Q. And so you put her in a normal mountain town. How she gets the kids to eat seems like an important part of your book.

A. Yes, I realized that this was a very important part of the original Hansel and Gretel. The parents are actually the awful ones in Hansel and Gretel, even more than the witch. They abandon their own children in the woods. So I thought I should keep this part of the story too. I asked myself: Why might parents get rid of their children nowadays? And that's when I decided it would be fun if they did so for the smallest, most petty reasons. I wrote the opening Prologue which is total comedy. But when Sol and Connie appear in Chapter One, suddenly things aren't so funny anymore.

A. Witches always have cats. I decided, "Well my witch has a dog instead." J. Swift the dog popped into the story as if I'd always known him.

A. The father in Hansel and Gretel seemed to me like a bad guy. He abandons his son and daughter in the woods to be eaten by wolves or worse. Even if he feels bad later, I didn't think Hansel and Gretel could really go back and live with him and feel safe. I don't want to give away the ending of Witch's Guide  in case you haven't read it, but of all the fantastic things that happen in Hansel and Gretel, the "we'll be fine back with papa" seems the most fantastical of all. 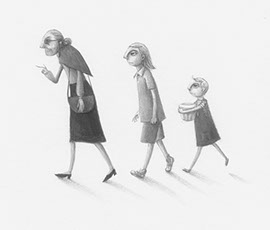